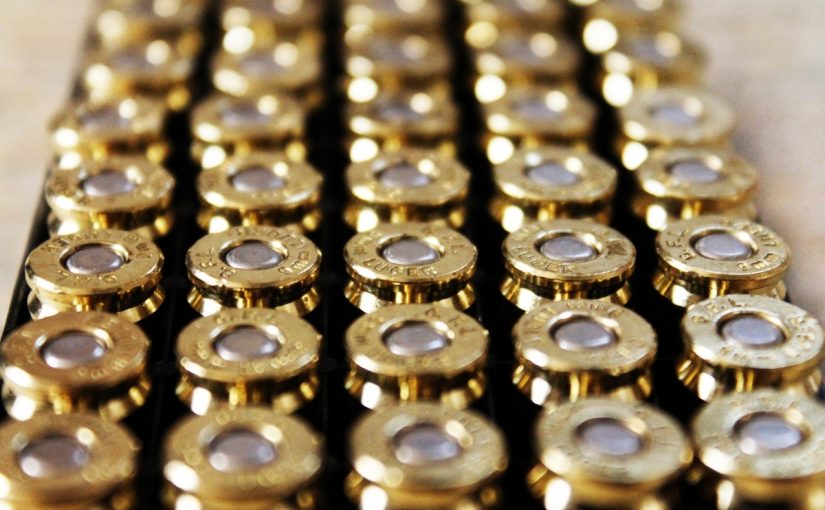 Obtaining ammunition was certainly no picnic during 2020, a year when understandably wary Americans purchased a whopping 23 million guns. (I pulled that figure from CNN but have no reason to assume it is accurate. Getting the real facts about firearms these days can be tricky, and it’s never reasonable to assume you’re getting them from big media or big tech.)

The best-laid plans couldn’t have prepared us for that surge in demand.

The big American ammo manufacturers – Winchester, Hornady, Federal Premium, Remington, and the like – were all eager to get their latest output into the hands of law-abiding citizens. Although, the pandemic’s impact on lead and copper production greatly limited what they themselves were able to produce, and component primers are still scarce. Overseas manufacturers like Prvi Partizan, Sellier & Bellot, Eley, Wolf, Tula, and even lesser-known entities like Igman and Sterling all stepped up as well.

With a surge in new gun owners, it’s important to make sure there’s accurate information out there for common (and uncommon) questions.

Most people wanted to know if a certain cartridge would work in their new firearm. Oftentimes these folks had bought a Glock 17, 19, or 43 and wanted to know if it would fire 9mm. Probably the most elemental question possible to ask, but understandable: Glock, a European manufacturer, stamps “9×19” on their slides and not America’s preferred “9mm.”

Nearly as many others asked me to recommend the best self-defense ammo for their new firearms. New and seasoned gun owners alike were especially disappointed this year because that .380 ACP ammo became exceptionally scarce during 2020. Chalk that up to the 380 pistol’s manageable recoil and ease of concealment, which are the two most sought out features for first-time gun buyers.

It’s important to understand what makes one bullet more suitable for personal protection than others. Here are the best self-defense bullets currently available, and why they’re good at their jobs.

I’m including the FMJ because it’s the most common type of projectile, which means FMJ ammo may be all you’re able to find at times. To be certain, the FMJ is not one of the best self-defense bullets. Its simple solid lead core and gilding metal jacket make the FMJ incapable of delivering terminal expansion, which is the defining characteristic of a self-defense bullet.

But the FMJ has often been used to neutralize (or, to put it less politically correctly, kill) people. This is because the Hague Convention, which is honored by the United States and most other countries, places a moratorium on the use of expanding bullets during international warfare. The rationale is that a non-expanding bullet incapacitates a soldier just as effectively as a more lethal expanding one. It’s good enough so long as that guy can’t fight any longer, so why bring about any more pain and suffering than absolutely necessary?

In short, all the ammo the U.S. Armed Forces use in combat is FMJ ammo. (Or other bullets which also can’t significantly expand.) A 124 grain FMJ striking a threat with over 300 ft lbs of energy is not going to do said threat any favors no matter how you slice it, which makes the FMJ a worthwhile fallback in the event you can’t find something better.

This is what I mean by “something better.” There are plain, non-jacketed hollow point bullets as well. These are made of pure lead, so they’re too soft to reliably feed into a semi-auto’s chamber, but they’re a perfectly acceptable choice for revolvers.

A hollow-point bullet operates on a simple principle. As its nose cavity fills with pressurized liquid and soft tissue, its surrounding core and jacket are forced to spread outward. This has the very obvious benefit of enabling the JHP to gouge a significantly wider wound cavity into its target than its original diameter alone could account for. It also lets the JHP exert more of its energy outward instead of merely forward, and furthermore significantly reduces the chance of overpenetration putting an innocent bystander in harm’s way. You only want your bullet to hit the bad guy, after all.

On a side note, the JHP often takes a lot of criticism because it’s “designed to be deadlier.” Question who’s making claims like these. A JHP isn’t designed to kill. It’s designed to stop the person who’s threatening immediate physical harm to your person, and its lower chance of passing through the threat has probably saved more bystanders than we could reasonably estimate.

JHP bullets are often available with performance-enhancing features. One of the most common among these is the bonded jacket. A bonded jacket stays rooted to the core when a non-bonded jacket might have peeled away from it. This lets the bullet retain the mass and resultant momentum it needs to penetrate deeply into its target.

Many if not most JHPs have skives (aka notches) radiating around their nose cavities. These strategically weaken the jacket, thus assuring it splits apart along a uniform axis to promote more reliable expansion at lower velocities. Some JHP bullets (like the Speer G2 and the Hornady MonoFlex) have elastomer in their nose cavities. This supple substance facilitates terminal expansion by getting squashed down during penetration so it can place more pressure against the nose cavity.

You may also find semi-jacketed hollow point (SJHP) bullets. These are also designed to deliver terminal expansion within soft tissue. They tend to expand a little quicker without a jacket to constrain the lead around the tip, but because the SJHP’s tip is relatively soft it’s less commonly loaded in semi-automatic firearms’ cartridges.

The SP is commonly loaded in rifle cartridges, although some handgun rounds also offer it. This bullet hasn’t got a nose cavity. Instead, its jacket leaves the lead core exposed at the bullet’s tip, which lets the lead flatten down as it meets with resistance from soft tissue. A soft point looks a lot like a mushroom after it has come to rest inside its target, which provides comparable benefits to the JHP’s terminal expansion.

SP bullets often feature bonded jackets as well, such as Speer’s Gold Dot and Federal’s Fusion. If you’re buying 223 Rem SP ammunition, it’s a good idea to look for the bonded jacket, because too shallow a wound channel may fail to reach the threat’s vital organs.

Wadcutters are cylindrical bullets. Its awkward profile can make it difficult for a wadcutter to reliably feed in a semi-auto, which is why we nearly exclusively find wadcutters loaded in revolver rounds.

The wadcutter’s profile makes it ideal for shooting paper targets, as it will punch a much cleaner hole through a sheet of paper than the FMJ’s usual round nose profile could manage. A wadcutter’s flat, circular meplat (aka tip) also cuts a wide wound channel into soft tissue – without the need for terminal expansion!

You might be asking: “Why not just select a self-defense bullet that’s designed for terminal expansion?” Well, terminal expansion is only possible if the bullet hits its target with a high enough velocity. A snubnosed revolver is unable to give a bullet a relatively high velocity because its short barrel doesn’t give the propellant gasses enough time to transfer their energy to the bullet during ignition. That’s why if you carry a snubnosed revolver – especially one which is chambered for a cartridge that isn’t very powerful to begin with, such as the 38 Special – you may be better off hedging your bets with wadcutter loads.

Wadcutter bullets are also available with hollow-point nose cavities, or as “semi-wadcutters” which have slightly tapered profiles that make them more aerodynamic.

In recent years, we have witnessed the rise of non-expanding self-defense bullets (not counting the wadcutter, which relies solely on the diameter of its nose profile to inflict a devastating injury). Examples of non-expanding self-defense bullets include the HoneyBadger and the ARX. Look at these bullets and you’ll notice they have grooves molded or machined into their shanks. That’s where the magic lies.

Non-expanding bullets are designed to create massive wound cavities within soft tissue. Their lateral grooves pressurize any soft tissues they come into contact with during high-velocity penetration, and subsequently jet them outward in lateral directions – often at higher velocities than the bullet itself is traveling in!

Why omit a nose cavity when the JHP is indisputably effective for personal protection? Because the hollow point design has a couple of major shortcomings. First, it gives the bullet a flat nose profile that may complicate feeding in a semi-automatic. Second, if that nose cavity becomes clogged with debris like wallboard or thick fabric, it may inhibit the bullet’s ability to reliably expand within soft tissue.

Bullets like the ARX and HoneyBadger don’t possess either of these shortcomings. And because they’re made out of materials that aren’t as dense as lead, these bullets also manage to achieve very high muzzle velocities, which in turn grants a flatter trajectory and greater energy delivery at short range.

We’re moving out of the realm of pistols and rifles and into that of shotguns (as well as revolvers that can fire shotshells like the Taurus Judge and the S&W Governor). Buckshot and slugs aren’t bullets per se, but their efficacy for self-defense is indisputable.

When selecting a shotshell for self-defense, you’re going to want to make sure you avoid birdshot. Birdshot is typically numbered between #9 and #1, as well as B, BB, BBB, and T. Although these smaller diameter shot pellets are capable of inflicting a deadly injury, they’re just not reliable enough when you want to neutralize the threat as quickly as possible.

Pick buckshot instead. These shot pellets are numbered 4 through 000, with 000 being the largest shot pellets commonly available. The police pretty much exclusively favor 00 buckshot (aka double-aught) in their line of work, but you can pick smaller buckshot pellets if you’d like to reduce your chances of over penetrating your target.

Slugs are essentially giant bullets, and will not give you the spread that shotshells are popular for. They’re extremely effective for home defense, as a one-ounce chunk of lead traveling at 1,500 feet per second or faster does exactly what you might imagine to its target. Slugs may also have hollow point nose cavities which enable them to expand, but take care – these powerful projectiles are pretty likely to pass through a human-sized target!

Frangible bullets are made out of compressed metal powders. They disintegrate when they hit a hard surface, and are popular for shooting metal targets because they virtually eliminate the chance of a dangerous ricochet or splash-back. Many people use frangible bullets for home defense when they really want to avoid hazardous overpenetration. If you go this route, just make sure you’re aware a frangible bullet cannot expand and is still capable of penetrating a human threat as well as multiple layers of wallboard!

That just about does it for the best self-defense bullets. As a parting thought, make sure you train with the same ammo you would use for personal protection. It is crucial that you familiarize yourself with its performance before you ask it to do the most important job in the world for you – even if it is more expensive than conventional FMJ range loads!