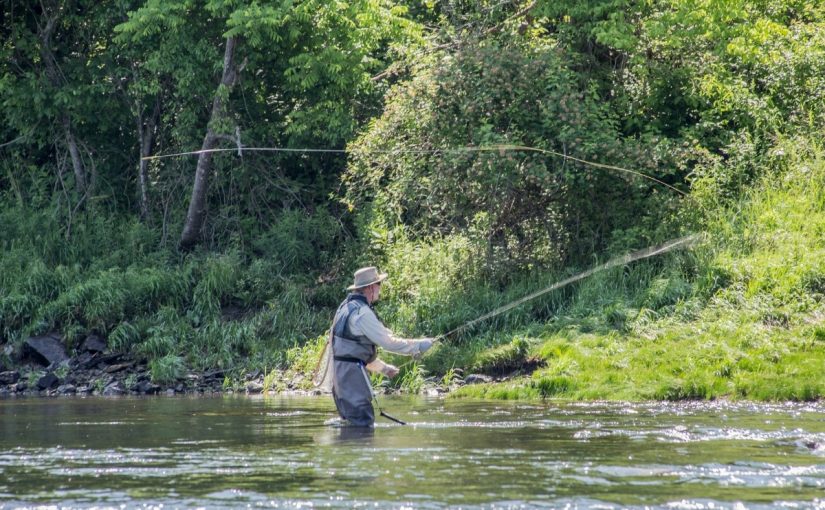 When the economy collapses, store shelves empty, and people start to lose their minds; people who educate themselves, practice survival techniques, and remain calm will be the ones who thrive. River trout fishing is a great way of gathering food if you know what passive and active fishing methods to deploy. In this article, you’ll learn how to catch trout in a stream using many different techniques.

Before we dive into some of the survival methods of catching trout, let’s focus on the standard and traditional ways that we all fish. It’s important to learn and master these techniques so you can rely on your experience in a survival scenario.

Fly fishing is one of the most trusted small creek fishing methods, especially for trout. This is done with the use of a fly rod, reel, and specific lures called “flies.” The casting process generally involves a backcast where you’ll throw the line behind your back or to the side of your body to build up enough force. Then, you’ll fire it forward with the built-up power resulting in a distance cast.

The reason why this method is so successful for river trout fishing is that it closely imitates what the trout want to eat. That’s not to say you couldn’t catch bass or panfish either because you can.

To find an ideal spot to fly fish in a river, you need to find somewhere where the water slows down a bit and you’ll need a pair of waders. The reason why you need to fish from the middle of the water is because of the backcast. You need water behind you so you can throw the fly over your shoulder and let it hit the water.

One crucial thing to think about is that it generally takes longer to learn how to fly fish. There are a lot of anglers out there who have mastered many fishing techniques but still won’t dare attempt fly fishing because it’s a whole different ball game. While it might be the best option for river fishing, you may want to master something else first.

The traditional spinning rod and reel combo is one of the simplest and most effective ways of fishing for anything. This combo will appeal to the widest variety of fish and it’ll be the simplest to master with many styles of rods and reels available all over.

What you’ll want to pay most attention to is where you plan to fish. If we’re plotting a survival scenario and you’re figuring out the rivers closest to your bug-out location, you’ll want to get the gear with the highest rate of success for those locations.

If you’re stream fishing for trout, you’ll need something super lightweight and finesse-based. An ultralight rod, lightweight reel, and something in the 4lb test range in terms of line will work best in these situations. If you approach the creek with bait that is too large and bulky for the water, you’ll scare everything away and likely come back empty-handed.

When it comes to choosing lures, I find that soft plastics work best for river trout fishing. Anything that imitates a bug generally performs well because this is what the trout are used to eating. They come to the surface to search for these types of critters so you want to imitate that with your presentation.

If you’re going to choose something else, I would suggest going with a soft plastic worm like a Yamamoto Senko or something similar. Live worms are a heavy target for trout so go with a brightly colored artificial worm.

Jigging is one of the best trout fishing for streams and rivers.  Keep in mind that this is a highly active method of fishing which means you’ll end up burning a lot of calories and spending a lot of time doing it. While it has a high rate of success, in a SHTF scenario, your time might be better spent doing something else.

The most important thing to remember about river jigging is that you need to find eddies and areas of the water that stop flowing. You can’t jig in moving water.

Since the full presentation is on your back, you’ll want to cast or pitch it out into standing water and twitch the tip of the rod to make the jig dance. You’ll still use ultralight gear and jigs that weigh around ⅛ ounce. I recommend choosing colors based on your surroundings so you’ll want to stock up to prepare for a time when you can’t buy whatever you want. Choose bright colors on sunny days and natural colors on cloudy days. If the water is murky after a heavy rainstorm, you’ll want to use bright colors to stand out in the stained water. Keep in mind that jigging requires you to create the presentation so you need to make the lure stand out.

Only once you master traditional fishing methods should you start to think about some of these. While they’re primitive and simple for survival fishing, a lot of the previously mentioned techniques can be practiced in real-life scenarios so you can plan for the imminent future. When it comes to trapping trout in rivers, these are the best ways to do it.

The main reason why I say to stick to the traditional methods is that a lot of these techniques are illegal. In most counties across many states, creating anything that obstructs the flow of water and fish is illegal and punishable by fines. So, unless you live in a very rural area of the country or in a place where self-sufficiency is supported, practicing these techniques will be hard. I don’t know about you, but I like to be prepared.

That said, when all hell breaks loose, you won’t be worrying about laws and all of these methods are fair game. They’re more passive, require less energy, and they can result in a much more stable harvest if you can master them.

Trotlines are my all-time favorite survival fishing strategy for trout because they work so well in rivers and they require very little attention once you’ve set them up. The key is to rig everything properly and make sure that it’s sturdy so you don’t lose your bait.

You’ll need some pretty large fishing hooks, durable line, and a plethora of live (or once live) bait. Many people use scraps from previously caught fish to rig the hooks.

Essentially, you want to drive a stake into both sides of the river (or use trees) and tie a rope or durable fishing line to both stakes so the line runs across the river. The mainline should have two floats holding it up so the line primarily rests under the water. From there you’ll put hooks throughout the line with a weight that stabilizes the line on the bottom of the river.

As fish move down the river, they’ll see the bait and either strike it or keep moving. This creates a ton of opportunities without you having to actively fish the river. Designate someone to check these hooks a few times per day to limit the chances of the fish getting away or breaking something. A great pro tip would be to cement your stakes into the ground for added durability.

Nothing is simpler than fishing with a net but there are a few different kinds of nets. A gill net is thrown into the water and pulled back immediately. These nets are generally used in saltwater fishing applications where catching shellfish is the goal. The holes in the net are large enough to allow small baitfish to pass through while still catching the larger fish that you’d want to prepare for a meal.

Dip nets are the type of net you’re likely thinking about when you think of a net you’d bring on a boat. It comes with a handle and it’s what you use to pull a fish out of the water from the side of your boat. You won’t use these primarily for fishing but you’ll want to have a couple to assist you with getting the fish out of the water.

Drift nets are the big boys that we want to focus on. These nets are completely illegal throughout most of the country so if you’re planning to practice this method (pre-apocalypse), be sure to do so carefully. The drift net will function much like a trotline with two stakes driven into the sides of the river and a net hung between. This will catch trout as they move down the river and the net will make it hard for them to get out. In a survival scenario, this is one of your best options for catching a lot of fish in a short amount of time.

Let’s say you find yourself in the middle of an economic collapse and society is in the middle of complete anarchy. You didn’t prepare very well, you don’t have many resources, but you’re starving to death and you need to feed your family. A weir could be your saving grace. This method requires nothing more than some rocks and some time.

You’re going to build a trap like the one above using rocks. You’ll shape them into a double heart design with the second opening being a bit smaller than the first. If the fish swim into the first opening, you’ve likely got them. Once they swim through the second opening, you’ve definitely got them. From there you can wade through the two pools with your dip net and scoop up as many as you can catch.

This method does require a serious time commitment with the initial setup and you need to have a DIY attitude because one small hole in the wall could result in a lot of your fish getting away.

Where To Find Trout

As you’re planning your bug out around river trout fishing, you need to know what to look for and how to decide that a location would be ideal for trout fishing.

First, the more remote the river is the higher chance you have of finding trout. Trout are a food source for wildlife such as bears and bobcats and they’re less common along major roadways and near towns. That said, this is a good thing when planning a bug out because you want to get away from these things as well.

You should also keep track of which rivers are stocked and try to find ones that are the most remote. That combination will result in a higher catch rate while also staying away from densely populated areas where people may go when the SHTF.

As you prepare and plan for the future, I want to leave you with a few important rules to always keep in mind for river trout fishing.

This point is always up for debate but the general belief is that powerbait is designed for stocked trout because it’s relative to what they eat when they’re being farmed. Wild trout do not have a taste for it so they won’t bite it. If you use it to enhance the scent of natural bait, you’re only doing yourself more harm. My rule is, if you’re fishing for survival, don’t use powerbait at all because eventually the stocked trout population will start to dwindle and it may or may not support the wild trout population.

Another known fact about trout is that they prefer cooler temperatures. Outside temps in the 60s are ideal so if you live in a place where it’s hot during the day, you’ll need to get up early for active fishing. If you’re planning on fly fishing you’ll want to hit the water as soon as the sun comes up. This is when the trout will be most active and you’ll have the highest chance of them hitting the fly.